We worked with InfernoRed, VotingWorks, and Dan Wallach of Rice University (thanks folks!) to develop a set of conventions, tests, and sample data (based on a starting dataset sample from the Center for Civic Design) that demonstrate how to encode the information necessary to conduct an election into a format that ElectionGuard can use. The election terms and structure are based whenever possible on the NIST SP-1500-100 Election Results Common Data Format Specification (PDF) and the Civics Common Standard Data Specification. The information captured by the NIST standard is codified into an election manifest that defines common elements when conducting an election, such as locations, candidates, parties, contests, and ballot styles.

ElectionGuard uses the data contained in the Election Manifest to associate ballots with specific ballot styles and to verify the accuracy of data at different stages of the election process. Note that not all of the data contained in the Election Manifest impacts the computations of tallies and zero-knowledge proofs used in the published election data that demonstrates end-to-end verifiability; however it is important to include as much data as possible in order to distinguish one election from another. With a well-defined Election Manifest, improperly formatted ballot encryption requests will fail with error messages at the moment of initial encryption; the enforcement of any logic or behavior to prevent overvoting or other malformed ballot submissions are handled by the encrypting device, not ElectionGuard.

In addition, since json files do not accommodate comments, all notations and exceptions are documented in this readme.

Elections are characterized into types by NIST as shown in the table below:

We present two sample manifests: general and partisan-primary-closed. The core distinction between the two samples is the role of party: in general elections, voters can choose to vote for candidates from any party in a contest, regardless of party affiliation. In partisan primaries, voters can only vote in contests germane to their party declaration or affiliation. As such, special, runoff, and primary election types will follow the general pattern, and partisan-primary-open will follow the partisan-primary-closed pattern. Open primary elections can follow either pattern as determined by their governing rules and regulations. (As noted above, ElectionGuard expects properly-formed ballots; e.g., it would error and fail to encrypt a ballot in an open-primary-closed election if a contest with an incorrect party affiliation were submitted (as indicated by the ).)

At least in the United States, many complications are introduced by voting simultaneously on election contests that apply in specific geographies and jurisdictions. For example, a single election could include contests for congress, state assembly, school, and utility districts, each with their own geographic boundaries, many that do not respect town or county lines. The ElectionGuard Election Manifest data format is flexible to accommodate most situations, but it is usually up to the election commission and the external system to determine what each component of the manifest actually means.

In the following examples, we will work through the process of defining different election types at a high level and describe the process of building the election manifest.

Each election can be thought of as a list of contests that are relevant to a certain group of people in a specific place. In order to determine who is supposed to vote on which contests, we first need to define the geographic jurisdictions where the election is taking place. The NIST Guidelines present an excellent discussion of the geographic interplay of different contests. The diagram from page 12 is presented below. 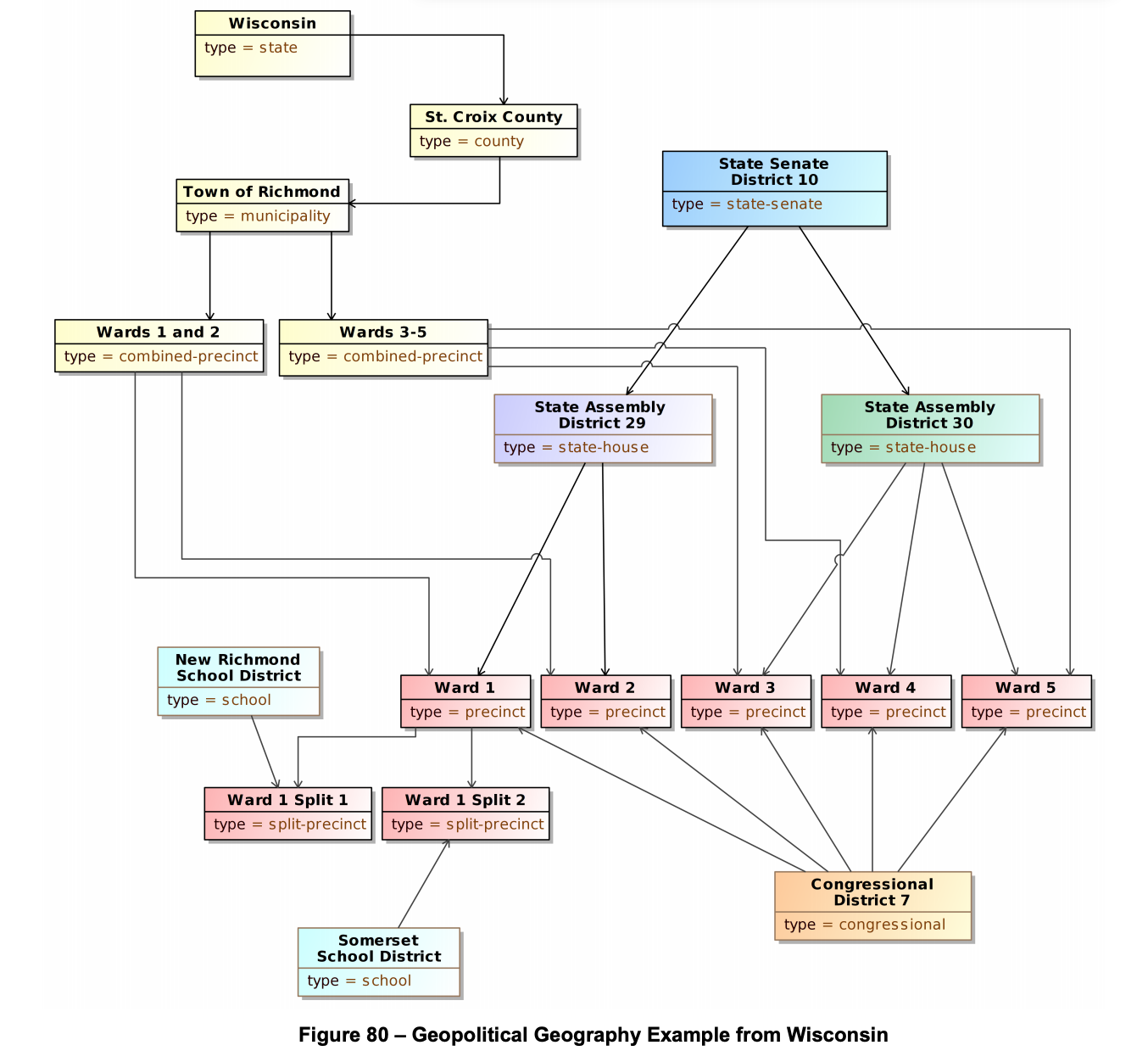 As the diagram shows, congressional, state assembly, school district and other geographic boundaries project onto towns and municipalities in different ways. Elections manage this complexity by creating unique ballot styles that present to voters only the contests that pertain to them. Different jurisdictions use terms such as wards, precincts, and districts to describe the areas of overlap that guide ballot style creation. We will use precinct but ward and district could be used instead.

In most cases, a resident of a specific precinct or location will expect to see a certain list of contests that are relevant to them. A contest is a specific collection of available choices (selections) from which the voter may choose some subset. For the ElectionGuard Election Manifest, each possible selection in a contest must be associated with a candidate, even for Referendum-style contests. If a contest also supports write-in values, then a write-in candidate is also defined. Candidates may also be associated with specific parties, but this is not required for all election types. 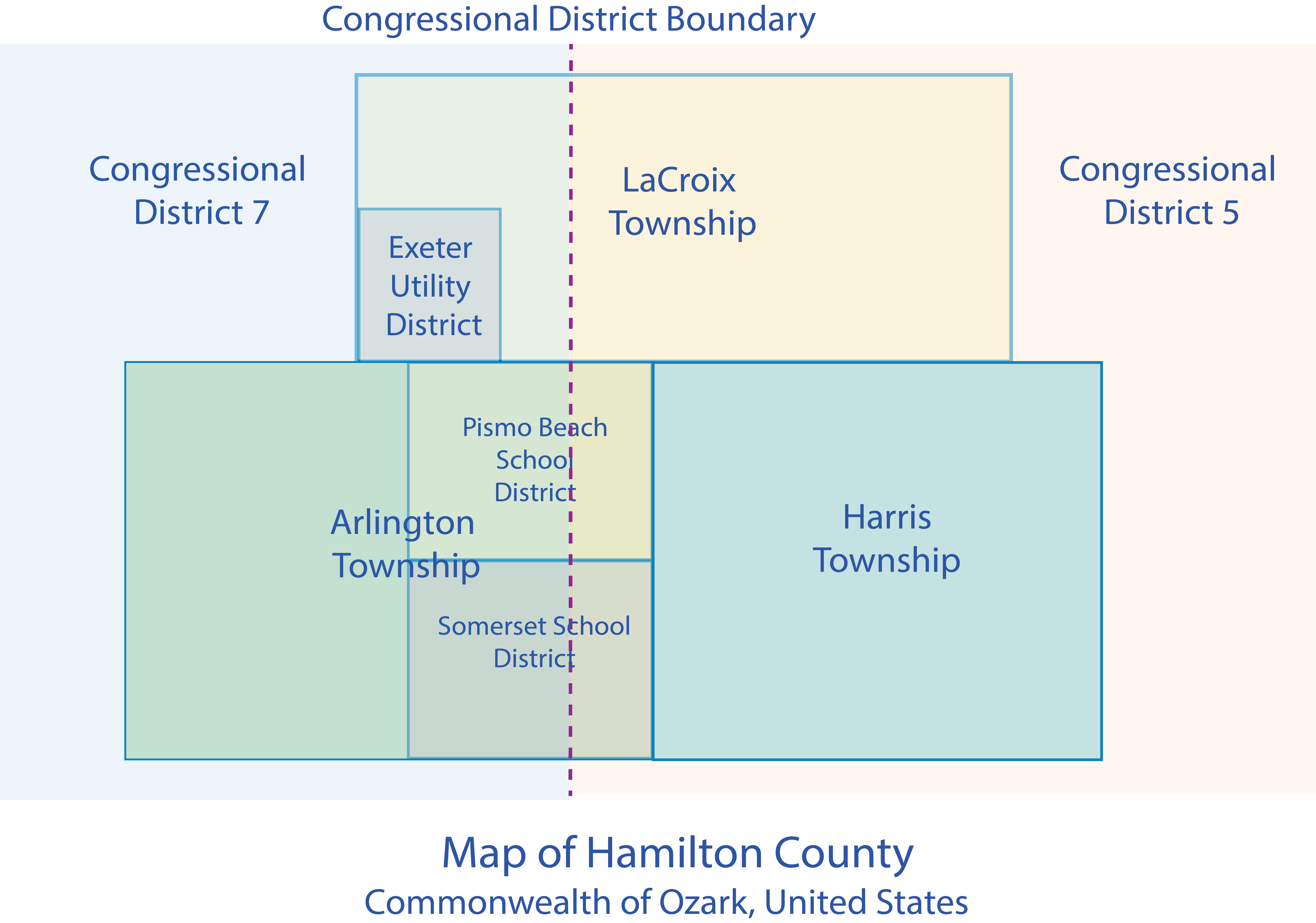 The Election Manifest includes an array of objects called geopoliticalUnits (a.k.a. gpUnit). Each Geopolitical Unit must include the following fields:

A general election will occur in Hamilton County. The county is voting along with the rest of the province, and the county is responsible for tabulating its own election results. This means that the Election Scope is defined at the county level.

For the general election, the following sets of contests (and associated geographic boundaries) obtain:

A ballot style is the set of contests that a specific voter should see on their ballot for a given location. The ballot style is associated to the set of geopolitical units relevant to a specific point on a map. Since each contest is also associated with a geopolitical unit, a mapping is created between a point on a map and the contests that are relevant to that point.

| Geopolitical Units are overlapping polygons, and ballot styles are the list of polygons relevant to a specific point on the map.

Similar to Geopolitical Units, we define all of the possible ballot styles for an election in our example, even if there are no contests specific to a ballot style. This is subjective and the behavior may be different for the integrating system:

for instance, instead of defining a single GP Unit each for:

we could have instead defined the GP Units as:

Then, instead of each Ballot Style having multiple GP Units, each ballot style would have applied to exactly one GP Unit.

When the election Manifest is loaded into ElectionGuard, its validity is checked semantically against the data format required to conduct an ElectionGuard Election. Specifically, we check that:

as long as the election manifest format matches the validation criteria, the election can proceed as an ElectionGuard election.

This documentation is under review and subject to change. Please do not hesitate to open a github issue if you have questions, or find errors or omissions.